A small boat drone is being built in Victoria for a big expedition. 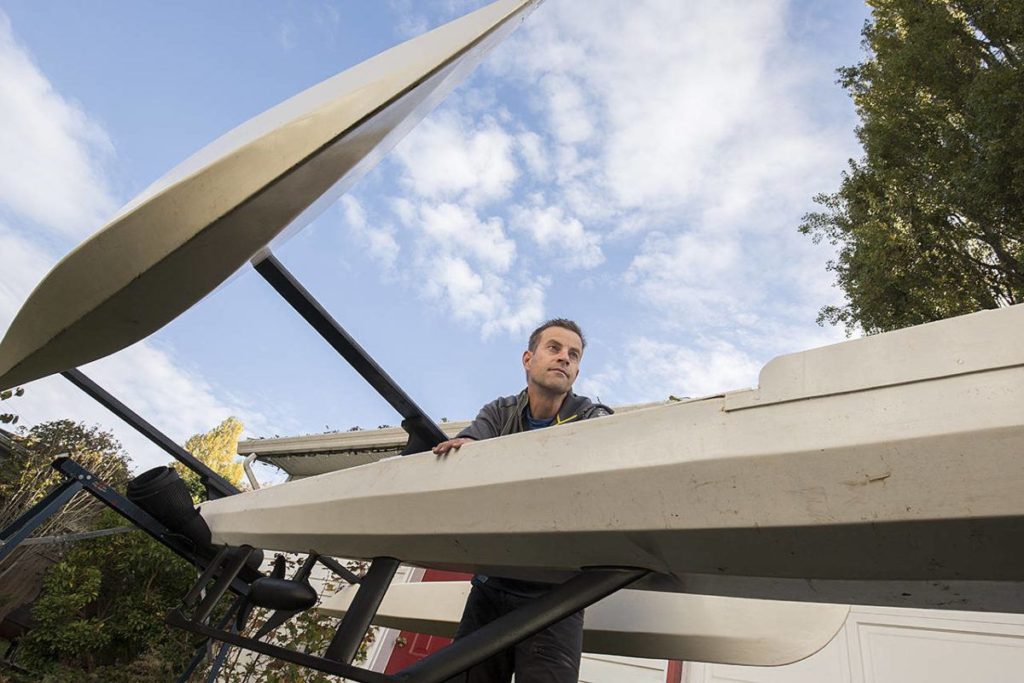 Colin Angus is helping create an automated, uncrewed boat he hopes will sail across the Atlantic Ocean. (Arnold Lim/Black Press)

The vessel will set out on a potential world record-breaking, 5,000-kilometre journey from L’Anse aux Meadows, Nfld. to Ireland, travelling at four knots (eight kilometres/hour) – about an average kayaker’s pace – over three to four weeks beginning in June 2018.

The predominantly solar-powered boat is the latest project for self-described Victoria ‘adventurers’ Julie and Colin Angus, who hope their boat becomes the first unmanned autonomous boat to successfully cross the Atlantic Ocean.

“It’s something that hasn’t been done yet, although there’s been 27 attempts,” Julie says. “There’s a lot of challenges with undertaking an initiative like this. Everything from the big seas, potential hurricanes, to discarded fishing gear.

“I believe one was even attacked by a shark.”

Built in conjunction with University of Victoria engineering students who are creating its electronic navigation, speed control and collision avoidance systems, the boat will be 7.5 metres (24 feet) long, weigh around 150 kilograms (300 pounds) and be able to withstand hurricanes and capsizing.

Research scientist John Fyfe at the Canadian Centre for Climate Modelling and Analysis is advising on oceanography and sensors, as well as planning the course and timing of the route, which will depend on weather conditions including fog and wind.

And while breaking a world record is reason enough for the expedition, the journey itself is meaningful.

The boat drone will collect oceanic and environmental data for scientific and climate change research. Once in the water, it will continuously update its position using two separate satellite tracking units and transmitting data. Julie says similar boats could be used for future research purposes, in the oil and gas industry, and even for observing coastlines and monitoring illegal fishing.

The drone’s oceanic route, beginning from the northernmost tip of Newfoundland, will reverse the route the Vikings took over 1,000 years ago when they came from Europe to North America.

“We decided we wanted to leave from L’Anse aux Meadows for the historical significance, but also because it is a good route for this boat to travel,” Julie says. “There’s definitely a historical connection there, this being a historical first in terms of an unmanned boat crossing the Atlantic.”

Building and testing should be completed by the end of December 2017. The Anguses will be finalizing plans for a cross-Canada educational tour early 2018 ahead of the launch, and the boat will be transported to Newfoundland in May. Visitors to the Angus’s website can view the boat drone’s location in real time once the expedition begins. From start-ups to local legends, the awards shine a light[...]

Open Ocean Robotics made a list of British Columbia (BC) CleanTech companies with the greatest potential for growth. From Hunting Poachers to Searching for Whales: A Year in Review at OOR

It’s been over a year since COVID-19 was first declared a pandemic and the world as we know it ended.  Border closures, work from home, supply chain issues, fear were some of the challenges we’ve all faced the last 12 months. Now as vaccine immunizations gain momentum, there is light at the end of the tunnel, but it’s still unclear what post-pandemic life will look like. We are a different world than we were...